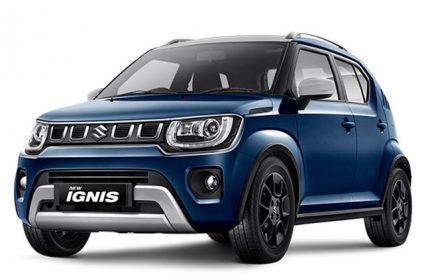 With a fuel economy of 4.8 liters per every hundred kilometers the Suzuki Ignis 1.2 GLX is a good option for those who are in the market for buying a New Car in UAE.

The Suzuki Ignis (Japanese: スズキ・イグニス, Suzuki Igunisu) is a subcompact car that was produced by Suzuki between 2000 and 2008, replacing the Suzuki Cultus, and subsequently as a small crossover from 2016.

The Cultus retailed under various names globally, notably as the Suzuki Swift. While the Cultus-based Swift was replaced by the Ignis in Europe and Australasia, Japanese models were in fact badged Suzuki Swift—thus debuting the “Swift” name in that market. The word “ignis” is Latin for “fire”.

As a result of a venture project between General Motors (GM) and Suzuki, the Ignis, from 2001 also formed the basis of the Chevrolet Cruze. The Cruze sold throughout Japan as a Chevrolet, with Australasian-market versions badged Holden Cruze. From 2003, Suzuki of Europe adopted a lengthened version of the Cruze as the Suzuki Ignis—representing a facelift of the original Ignis. In the same year, Subaru adopted the car as the Subaru G3X Justy, also exclusive to Europe.

Welcome to TownHub.
Claim listing: Suzuki Ignis 2020 1.2 GLX
Select the fields to be shown. Others will be hidden. Drag and drop to rearrange the order.
Click outside to hide the comparison bar
Compare
Compare ×
Let's Compare! Continue shopping